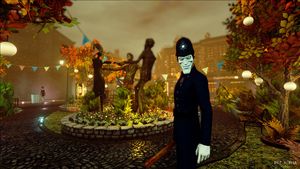 Bobby is a British slang term for police officer and wear a uniform similar to those of real-life officers during that era. They are seen all around Wellington Wells and act similarly to Wellies, except they are taller and much more powerful. They are also seen at some the Bridges that connect the five islands of Wellington Wells. The bobbies can also be found guarding Joy detectors and investigating crime scenes inside Hamlyn Village.

There is currently a few variations of Bobbies as well, notably ones sporting a red uniform, they're most often seen in the parade district and guarding important locations.

Bobbies are notorious alcoholics and can be bribed with scotch, which will cause them to down it and stagger away. The bobbies guarding the apple tree in Lud's Holm can be found drinking bottles of alcohol at night, putting them in a semi-distracted state (they still will attack if the player is seen/heard).

Most commonly, the bobbies will give you a verbal warning to back off from whatever you are doing that displeases them. However, if you commit a serious offence - such as being outed as a downer or hurt a Wellie (not a Wastrel) - they will attack on sight. If a bobby is alone, he will attempt to summon reinforcements (if there are any available) with a Bobby Whistle. When inside Hamlyn Village, reinforcements will arrive via a nearby Bobby Popper.

A bobby will rarely fight with his fists; instead, he will use his baton. Beware these batons as they deal a powerful blow to your character's health. If they are attacked quick enough, bobbies can usually be defeated before they draw their weapons. It should also be noted that a bobby cannot be taken down from behind unless the skill “Big Game Hunter” is bought.

Once killed, the bobbies can drop several unique items such as: Bobby Batons, Security Keycards, Bobby Whistles and Bobby Hats. Although the Bobby hat has no use, it can be equipped. The bobbies will also occasionally drop the Improved Gas Mask if killed at night.