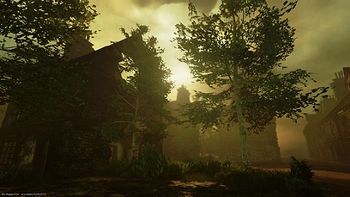 The Garden District is the island players spawn on when first starting a game. It has a small underground room that players start off in which contains storage and a Mechanical Station. It is the only district where the Wastrels live.

The district itself implies that something bad happened in the town's history, as nearly every building in it is bombed-out or partially destroyed. There is an extreme food shortage in the district, and very few edible items can be found while looting - obviously, there is also a notable lack of Joy pills.

In order to blend in within the Garden District, players will want to wear a Torn Suit.