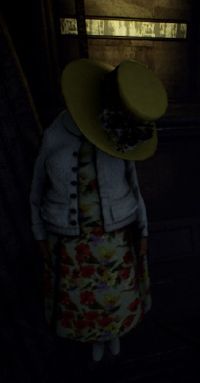 Mrs. Stokes in the underground shelter.

Mrs. Stokes is a minor character in We Happy Few. She is seen hanging in Arthur Hastings' beginning underground shelter where she literally fell off her rocker. She had a daughter named Emily or Emma, who is referenced in her letters. There is a quest that requires you to dispose of her, which can be achieved by simply picking her up and dropping her outside of the place you spawn in after the prologue

The following quest is related to Mrs. Stokes:

As of the most recent alpha build, this quest appears to have been disabled as the area where she was supposed to be found hanging has been walled off.

Currently, searching her corpse does nothing.