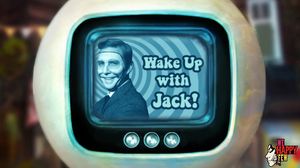 Uncle Jack is a main antagonist in We Happy Few. He acts a sort of leader figure for the town, continuously broadcasting on every television and radio. He serves as a propagandist for the town, pacifying the citizens with childish games like Simon Says, reminding them to constantly take their Joy, and encouraging them to kill the Downers, who supposedly threaten their way of life. He also tries to stop the Wellies from looking into their past, telling one viewer to lock up a box of his medals from the war, and refusing to answer another's question about how England won the war.

According to The House of Curious Behavior's List, he is denied entrance because he is very behind on dues.

Prior to the Germans' return to their home country, he was a collaborator of the occupation forces, acting as a calm and familial figure to ease the country's transition into a subject of the German Empire. While fully committed to the cause starting off, his will is shaken when the Germans begin rounding up children of 13 years of age to ship them to concentration camps, though he is able to hide his daughter thanks to his political clout. Unfortunately, his daughter is discovered by Ollie Starkey and is reported to the Home Army, who, as she attempts to escape, gun her down.

At the end of the game, it is revealed that Jack had a breakdown on set after a news story about a woman who made dolls reminded him of his daughter. He became a Downer during the taping and attempted to reveal the truth of Wellington Wells' situation, saying that they would all starve to death and exhorting the populace to stop taking Joy. The tape ends with Jack smashing the camera with a cricket bat, and it is unknown what happened to him afterwards.

Uncle Jack's YouTube debut was June 4, 2015, as the launch video for the game's Kickstarter campaign.

Uncle Jack's first episode was released on June 25, as a Kickstarter update.

The sequel was released June 30, also as a Kickstarter update.