From We Happy Few Wiki
(Redirected from Wastrels)
Jump to: navigation, search 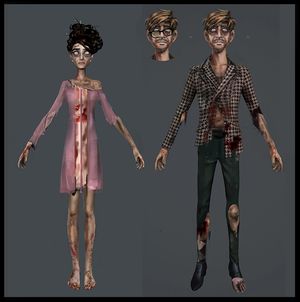 Wastrels are Wellies who either by choice or from having reacted badly to bad batches of the three currently available flavours of Joy, are considered Downers by other Wellies. They were introduced with Update 5. They range from lucid to completely insane. They live in the Garden District, and dislike Wellies. It is common for a fight to be seen between Wastrels and Bobbies because the entrances to Hamlyn are often guarded by them.

For the most part, Wastrels are non-hostile. Instead, they spend their hours plodding about the streets of the Garden District muttering to themselves. Occasionally a Wastrel will approach the player begging for donations, such as food or healing balm. The Wastrel will occasionally gift the player something in return. The chances of receiving a more valuable item can be increased by reading certain skill books found within the game. The Wastrels appear to follow a similar sleeping schedule to the Wellies. That is, they clear the streets to go to bed around 10 pm and then reappear around 7 am. They have their own version of bobbies that keep the curfew.

Like the majority of the characters in the game, the Wastrels will not become hostile towards the player unless their suspicion level is high.

Things that will make a Wastrel suspicious include:

The only other cases where a Wastrel will attack the player is when they are high off of hallucinogen or have become rabid from the plague.

The Wastrels residing in Lud's Holm are the only NPCs who have a chance of carrying the plague. Infected Wastrels will have a red swarm above their head. The stage of the disease will determine the behavior of an infected Wastrel. Those who are in the early stages will been seen stumbling around in a zombie like state. At this stage, for reasons discovered later by a doctor at the medical center, the Wastrel will subsequently forget how to speak English, instead ranting and raving in fluent Anglo-Saxon. Those who remain in this state for a significant amount of time may become hostile with the player and try to attack. And, occasionally those in the late stage can be seen collapsing to the ground as they succumb to the disease.

The player can become infected by the plague when in combat with an infected Wastrel. The plague can also be obtained by touching or searching the body of a deceased Wastrel who died from the disease. These bodies are usually signified by the growth of Histoplasma Mushrooms on the skin of the deceased Wastrel.

The difficulty of the Wastrels is very low; most can be taken out with 2 - 3 hits of a medium grade weapon such as a Frying Pan. They will either attack the player by scratching at their face or with a crude weapon (e.g. a Branch, Double Knocker or even a Rock). On rare occasions, some Wastrels may use a Pointy Stick which will cause bleeding damage to the player.

With the exception of quest related characters, Wastrels usually do not carry valuable items. Typically one could expect to find rotten food, Empty Syringes and low-grade weapons.