This was last updated during game version Full Release V.1.3. 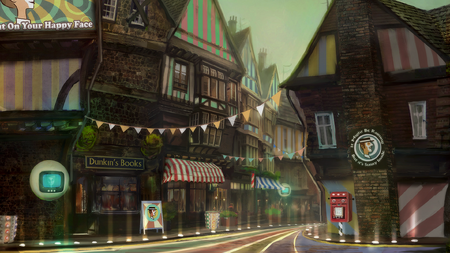 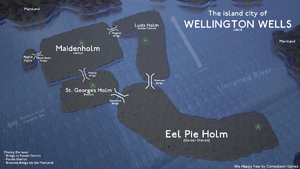 A randomized Wellington Wells. Here you can see all islands accessible as of 13/04/2017.

Wellington Wells is a dystopian island city and the setting for We Happy Few.

Wellington Wells is sprawling habitat, built on a small archipelago located in the Severn Estuary/Bristol Channel, in the south-west United Kingdom. Each island is a "holm" (an old English word meaning an island in a river). As of Full Release v.1.3, the currently accessible islands are Barrow Holm, Rat Holm, Eel Pie Holm, Lud's Holm, Ravensholm, Maidenholm, St, George's Holm, the Holm of Usglass and Apple Holm.

Each island is connected to the others via bridges, some of which are heavily guarded. The bridges are the only way to traverse between islands, as the waters are treacherous, and you cannot swim.

In happier times, the city was linked by an underground metro system called the Wellington Underground. However, the metro has since fallen into disuse and severe disrepair, and the trains no longer run. Some stations (like Eel Pie Holm) have been re-purposed to serve as Motilene pumping stations.

Wellington Wells is administratively divided into three districts so far; the Garden District (where Wastrels live), the Village of Hamlyn (where Wellies live), and the Parade District, aka "The City" (where richer Wellies and the government lives).

As Wellington Wells sits in the middle of the Bristol Channel, the player can observe vast expanses of land to the north (Wales) and the south (England). This is the fated "Mainland" (i.e. the mainland United Kingdom), to which player characters will try to escape.

Every new campaign of We Happy Few will randomly generate an entirely new version of Wellington Wells, meaning that no two playthroughs will take place in the exact same iteration of the city. This also serves as a lore mechanic. Any in-game character who overdoses on the local happy pills will completely forget the lay of the land and will have a brand new town to explore (from their point of view). Real life players of We Happy Few will obviously not overdose and forget, so a new Wellington Wells is created to serve the purpose of the *player* suffering Joy-induced amnesia.

The starter island for all new campaigns, Arthur, after the events in the prologue, is chased by bobbies all the way to Motilene Station 4 in Eel Pie Holm. After the story quest "Wellington Underground" is completed, Station 4 becomes the player's first shelter.

An island only accessible in Act: II (Sally's playthrough!). It has two hatches, no hamlets and a lab. its inhabitants are plauged wasterls.

The first randomly generated island of the Garden District.

This sites inhabitants are plauged wastrels which will constantly chase the player. It houses Victory Memorial Camp, where the Home Army unwwilderness. It also houses two shelters. Tingly guards a dreadful secret.

The second island of the Garden District, which the government has locked down for the purpose of quarantining (or dumping) victims of a plague that has been spreading through Lud's Holm. These plague-infected Wastrels mostly appear at night.

The Village of Hamlyn

Hamlyn village is the first section of Wellington Wells proper that the player will encounter. Picturesque villages, groovy rainbow roads, and Joy dispensers can be found here, and it obvious that "normal" life reigns, with the presence of a city government maintaining roads, gardens, and Motilene infrastructure. A local uniformed police force is also present, preventing crime and investigating reports of Downers. Food is much more plentiful here.

The first island of Hamlyn, and the first area that is Wellington Wells proper.

The second and larger island of Hamlyn, usually far more dangerous for any downers lurking about. Can sometimes be connected to Lud's Holm, meaning one can avoid visiting Maidenholm altogether.

A tiny little island off St. Georges Holm. It is where Haworth Laboratory, and Dr. Verloc Ph.D, are based.

The economic and political centre of Wellington Wells, Arthur is chased from his job and happy life here all the way to the Garden District. The Parade District also contains the Britannia Bridge, which is the final bridge and connects to the Mainland. Everybody is VERY well dressed here, and security is much more prevalent, with lots of Red Bobbies, Peepers, and Headmistresses. Buildings are much taller and much grander. The headquarters for many institutions and government departments are here, including the Wellington Wells Broadcasting Corporation.

The Executive Committee, the ultimate power in Wellington Wells, is based in the Parade District.

The island on which the Parade District sits. It contains Apple Holm Train Station, the Broadcasting Tower, the Wellington Wells Hospital, and the Department of Scientific and Industrial Research, to name a few.

No longer in game.

A placeholder island which served as the "end" of the game in build v.38678. This island contains an abandoned mansion, a crashed V-1 rocket, a LOT of toxic fog, and the hatch Arthur must access in order to escape to the Parade District and finish the game. Was accessible only from Maidenholm.

The island bridged to Maidenholm. No joy booths, can only look for joy pill from trash bins. No save house for recovering and hiding at night and rather difficult to find food and extremely difficult to look for water.

The city hall of Wellington wells is based in the parade district (as seen by looking out of the window in Arthur's office) and provides services such as utility staff and police officers. The city hall is in a state of extreme disrepair, with broken pneumatic tubes and lots of unfiled paperwork present in the offices. The dwellers do not see it, though.

During World War II, England was attacked by German airplanes and the Germans succeeded in occupying England. The residents of Wellington Wells did something called "the very bad thing" which caused the residents to become depressed. This is believed to be have been the deportation of Wellington Well's children to Germany, under the assumption that the occupying Germans were unbeatable with their (fake) tanks. To counter this, a drug called joy was invented. Taking this pill, residents become happy and forget their dark past. Due to this, anyone who is not under the effects of Joy are known as downers.